What's On My Mind / Boyce & Hart, Monkees and More

They fought for our rights — Please Vote November 5, 2012

Please Vote —  Please don’t let their fight for our right to vote be in vain; let your voice be heard it matters!

The 19th Ammendment guaranteed that people could vote regardless of sex and it was ratified in 1920. However, US women were never expressly forbidden from voting by federal law. Some states did pass oppressive laws though and in actual practice it was different for women to vote because of discrimination.

That’s not to say there weren’t any women voting at all though. Brave and forward-thinking women had been voting in various local and state elections since colonial times. One of the most influential (and there were many) was Susan B. Anthony. Anthony and several other women in Rochester, NY registered and voted in the 1872 presidential election. They were arrested a few weeks later. Anthony eventually stood trial for “illegal voting”, was convicted, and was ordered to pay a $100 fine. She vowed to the judge she would never pay a penny of it. True to her word, she died in 1906 without paying a cent. 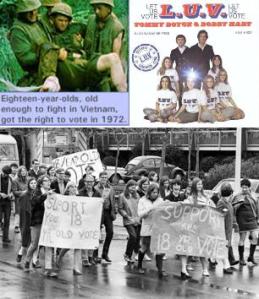 L.U.V. Let Us Vote–http://youtu.be/YnUOwATOs4g Tommy and Bobby were involved in a political campaign to elect Robert F. Kennedy and then, following his demise, they took on the role of leaders in a movement to lower the national voting age to 18 and won; kids were fighting in the war and could not even vote. Don’t take your freedom to vote for granted … let your voice be heard and VOTE!

2 Responses to “They fought for our rights — Please Vote”