What's On My Mind / Boyce & Hart, Monkees and More

Filed under: Uncategorized — Caroline Boyce @ 7:08 am

In honor of all you condo owners who are frustrated that your requests and/or suggestions are not taken seriously by your association board… I thought this might make you chuckle.

Filed under: Uncategorized — Caroline Boyce @ 10:09 am

Manchester Gets It First at the Opera House

Exotic locations, far out cars, groovy spies and The Monkees’ Biggest Hits!
Austin Powers meets James Bond, Monkee Business is the zany new musical using the swinging soundtrack of The Monkees’ hit songs! It’s the story of four innocent boys who fall prey to an evil record producer and are tricked into impersonating one of the biggest bands in the world; The Monkees: a group that once outsold The Beatles and The Rolling Stones.
Featuring a huge cast, and a seriously loud and LIVE rock and roll band, this madcap ‘Austin Powers-style’ plot promises to be a nostalgic trip down memory lane.
This exciting new musical for 2012, features the smash hitsDaydream Believer, Last Train To Clarksville, I’m A Believer, My Boy Lollipop and of course Hey Hey We’re the Monkees**.
Written by Peter Benedict (Naked Flame, Fire Down Under, Deadlock), directed by David Taylor (A Chorus Line at Drury Lane, Cats in Toronto, The Prisoner of Second Avenue at the Haymarket in London), choreographed by David Morgan (Chitty Chitty Bang Bang UK Tour) and produced by Michael Rose Ltd and the Ambassador Theatre Group.
The producers of Monkee Business the Musical said today: ‘We are all deeply shocked and saddened to hear about the death of Davy Jones. He was a wonderfully talented musician and his songs brought happiness to millions of people around the world. We hope that Monkee Business the Musical will be seen as it was always intended, a loving tribute to all of The Monkees and a celebration of their lives and careers. Our thoughts and prayers are with Davy’s family and friends at this sad time.
‘The Manchester run will be dedicated to Davy, his talent, work and music and the laughter and fun they created for the youngsters of the time, and subsequent generations who have discovered and loved them too.’ 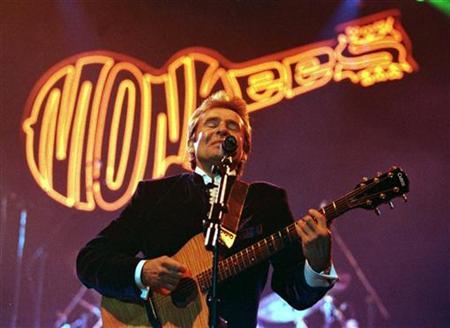 – A private funeral was held on Wednesday for onetime teen heartthrob and pop singer from The Monkees, Davy Jones, near his home in Florida, a spokeswoman said on Wednesday.

Immediate family including his wife and daughters attended the small, private service. Jones’ body was to be cremated and his ashes returned to his birthplace in Manchester, England, publicist Helen Kensick said.

The lone British member of the 1960s made-for-television pop band that scored hits such as “Daydream Believer” and “Pleasant Valley Sunday,” died suddenly after suffering a heart attack in Florida last week at the age of 66.

A public memorial service for Jones will be held next week in Manchester, where Jones also grew up, while another public service is yet to be confirmed but may be held in either Los Angeles or New York, Kensick said.

It is not known if any of the other former Monkees — Micky Dolenz, Peter Tork and Michael Nesmith — will perform at the public memorial services.

Jones sang lead vocals for the band whose other hits included “Last Train to Clarksville” and “I’m a Believer.” He gained worldwide fame for his turn on the TV comedy series “The Monkees” that ran from 1966 to 1968 and later played for many years in re-runs.

Jones suffered his heart attack while attending to horses he kept in Indiantown, Florida, about halfway between the Atlantic coast and Lake Okeechobee. He had lived with his third wife, Jessica Pacheco-Jones, in Hollywood, Florida, in recent years.

In addition to his wife, Jones is survived by four daughters from two previous marriages.

Davy Jones passed away today Feb 29th from a heart attack at age 66.  I’m in shock and deeply saddened as are so many worldwide as the news rippled across the globe.  Davy gave so much to so many during his lifetime touching lives for decades; he was blessed to do what he loved in life and graciously shared himself with the world. Along with you our (Bobby & MaryAnn Hart and me & my family) heartfelt sympathy and loving prayers go out for his family, fellow Monkees, his friends and fans. Thanks for sharing your outpouring of love with us via email and social sites as we find comfort in each other.  The world has lost a dear man, loving husband and father, and a great talent…R.I.P. Davy you will be sadly missed and tears are falling around the world.

Monkee Musical To Hit The Stage

MONKEE BUSINESS THE MUSICAL will have its world premiere at Manchester Opera House in March before moving to other UK cities.
Featuring the Songs of the Monkees
Thursday 29th March – Saturday 14th April 2012
Monkee Business The Musical is a fabulous new musical
using the wonderful soundtrack of Monkees songs.

Written by Peter Benedict (Naked Flame, Fire Down Under, Deadlock), directed by David Taylor (A Chorus Line at Drury Lane, Cats in Toronto, The Prisoner of Second Avenue at the Haymarket in London.) and choreography by David Morgan (Chitty Chitty Bang Bang UK Tour) it is produced by Michael Rose Ltd.
Monkee Business The Musical tells the story of four innocent boys who fall prey to an inscrupulous producer and are tricked into impersonating one of the most famous groups in the world.  As they struggle to conceal their own personalities, a frantic world tour leads to entanglements with a glamorous Russian Spy, a Tower Beefeater and a railway carriage full of nuns.
Monkee Business will pay homage to both the crazy chaos of the Emmy Award winning TV series and the brilliant music of The Monkees featuring hit after hit including I’m A Believer, Last Train to Clarksville, My Boy Lollipop, You Don’t Have to Say You Love Me, Hey, Hey We’re The Monkees and Daydream Believer alongside many more iconic songs from the era.
Featuring a cast of 20, a nine piece band in the pit and brand new designs by Morgan Large (Flashdance, Never Forget, Footloose), Monkee Business The Musical not only promises to be a nostalgic trip down memory lane for all lovers of The Monkees but also an exciting new musical theatre product whose fantastic score, madcap scenarios, hysterical script and eccentric charm will appeal to you and old alike.

SURFING TSUNAMIS OF CHANGE written by my daughter Shanah Trevenna is a powerful story of her life’s journey and her passions that eventually led her to Hawaii; it sheds new light on what stifles change, and shares engaging research and proven strategies that every individual, organization, business and community can use.  It can be read as a narrative, a memoir, or as a case study; however, as the title suggests, it is really a handbook for creating positive change in any arena. It’s an interesting read and a book I’d pick up to read even if it had been written by another author; however I admit that I’m bursting with pride that my daughter wrote it. Check it out!  Thanks for your support

Next Page »
What's On My Mind / Boyce & Hart, Monkees and More
Blog at WordPress.com.
%d bloggers like this: